When I first posted these on my instagram, everyone loved them! I promised that I would write up the recipe –  so here it is! 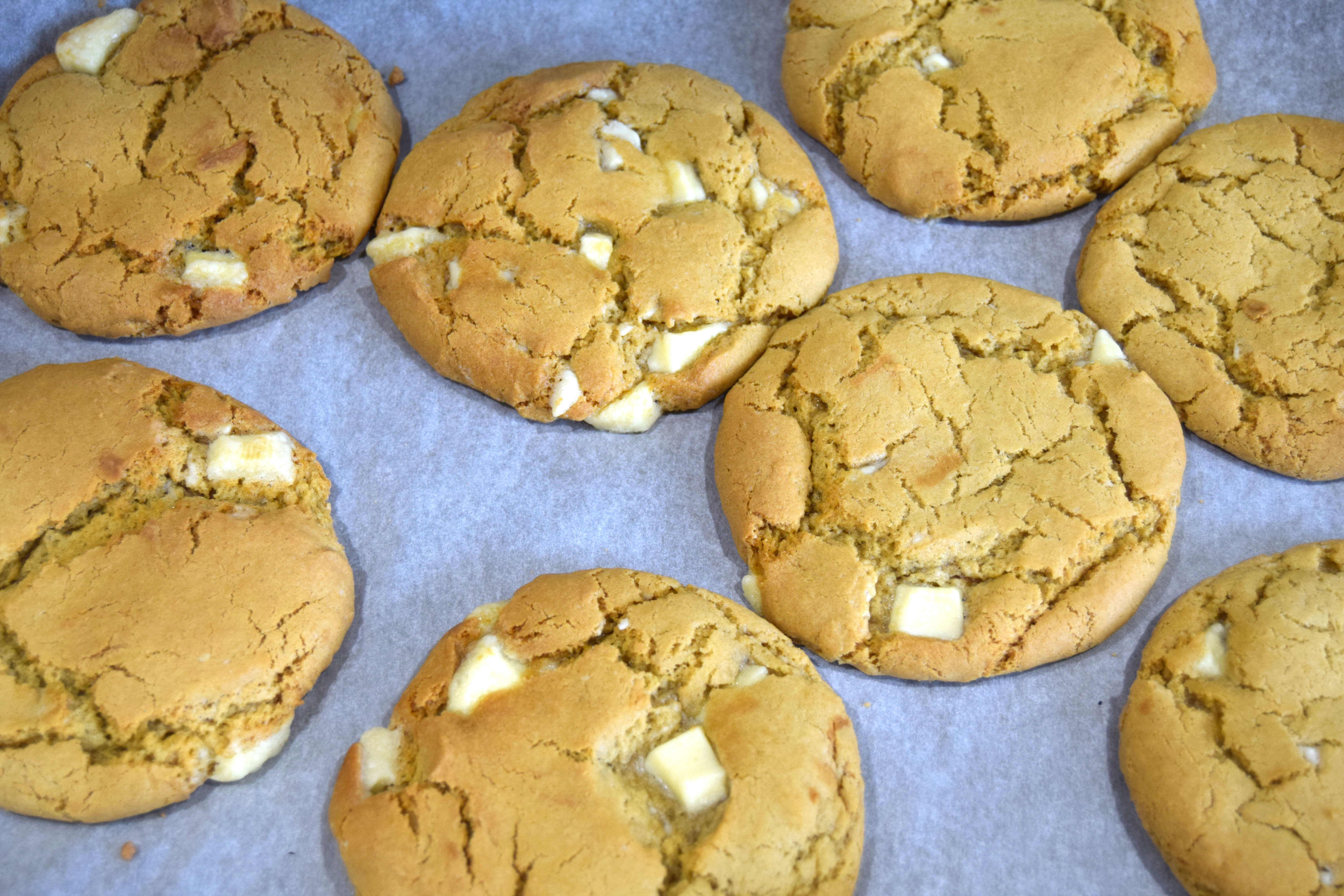 These cookies are white chocolate chip – but with a hidden surprise…

The cookies themselves are pretty big, so make sure when you bake them you leave plenty of space on the tray for them – else you end up with several cookies stuck together. 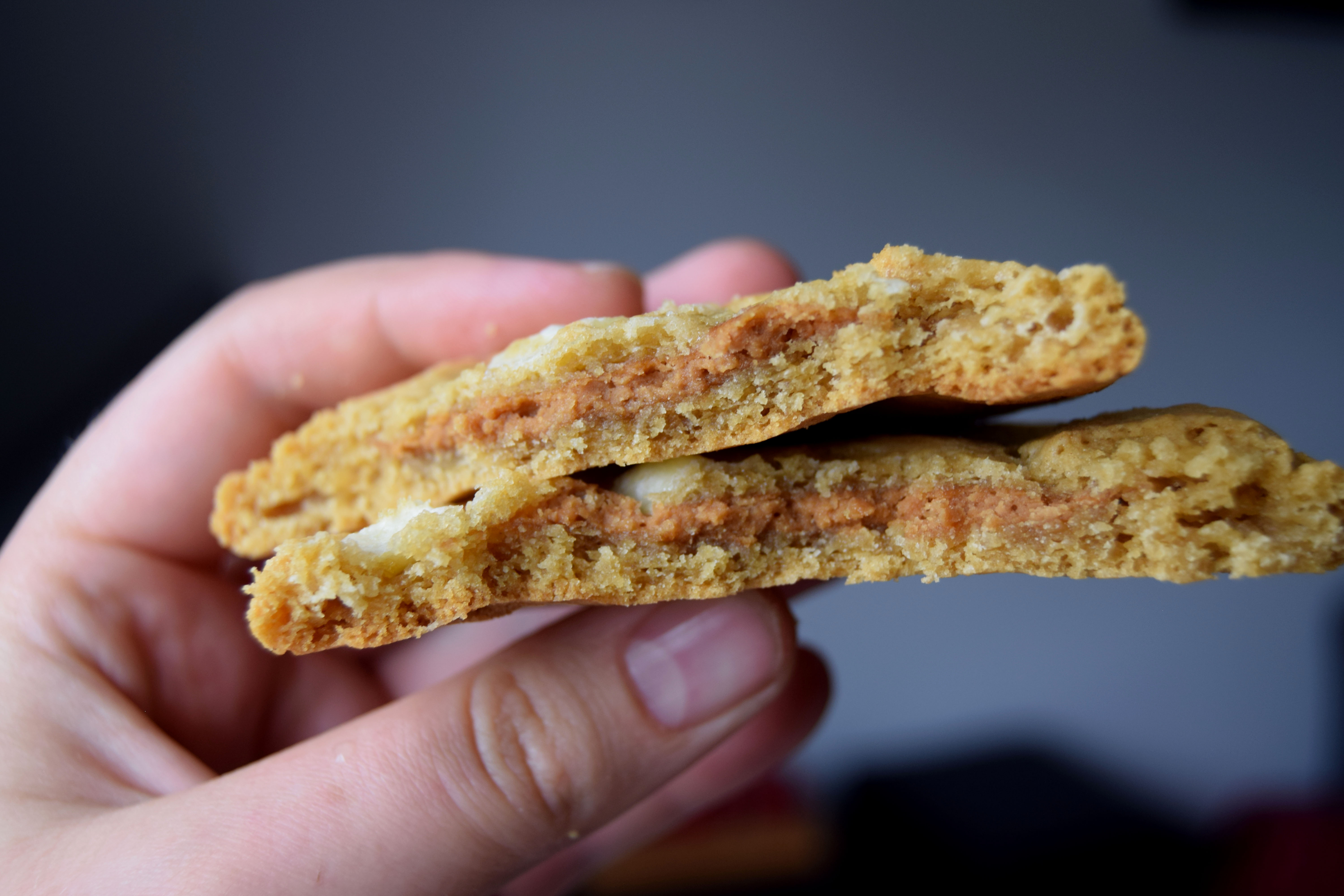 What’s this? A blog post? Outside of VeganMoFo?! Yep, that’s right. I’m as shocked as you. I made these biscuits and thought, hey, why not blog them! They came about quite by accident – I made a Bakewell tart and had leftover glace cherries and ground almonds, and thought I’d use those Bakewell flavours and make biscuits! 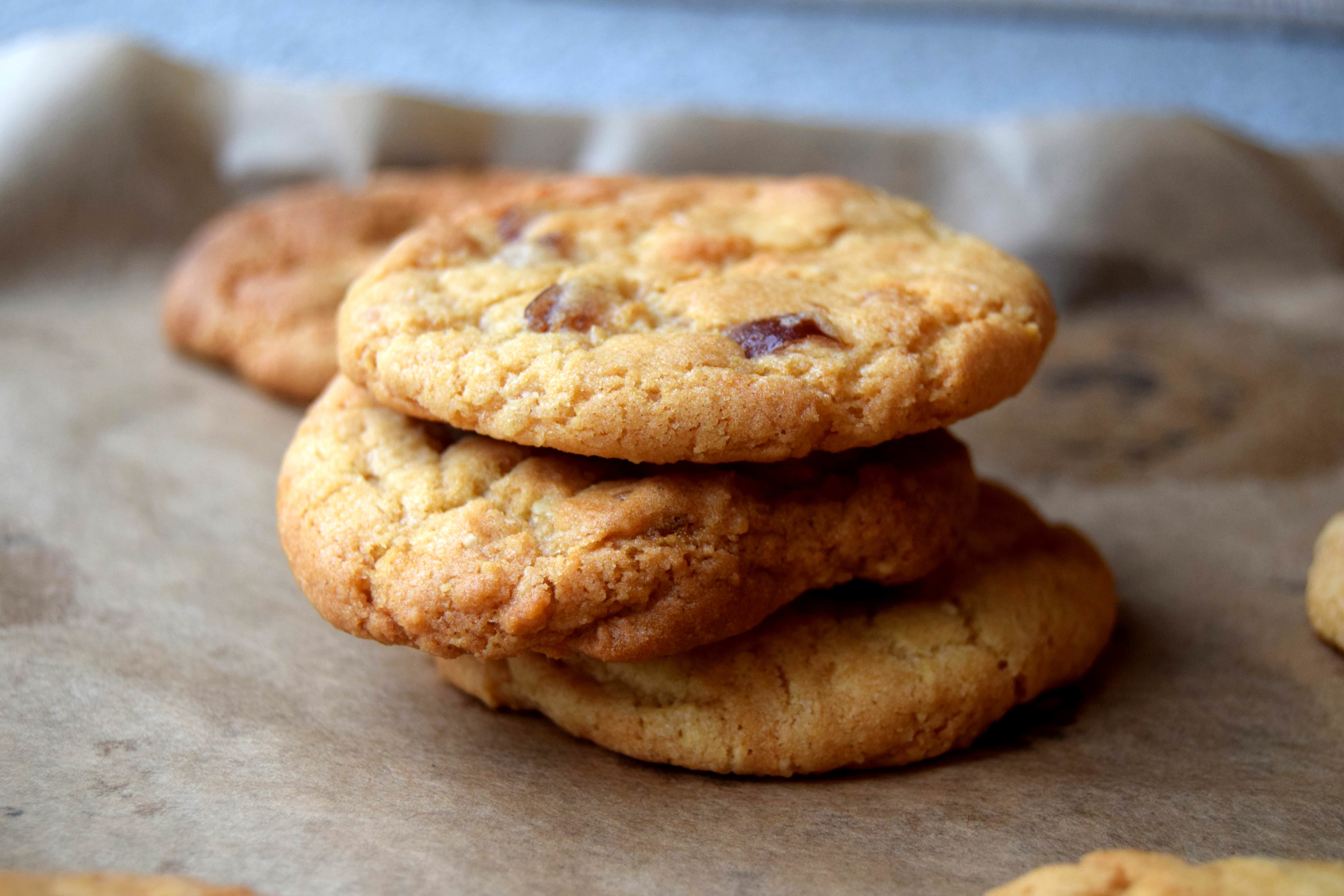 They’re pretty simple to make, with ground almonds and almond extract in the dough giving it that Bakewell flavour, and chopped up glace cherries folded through. Glace cherries are a little sticky to chop, but they are worth it! 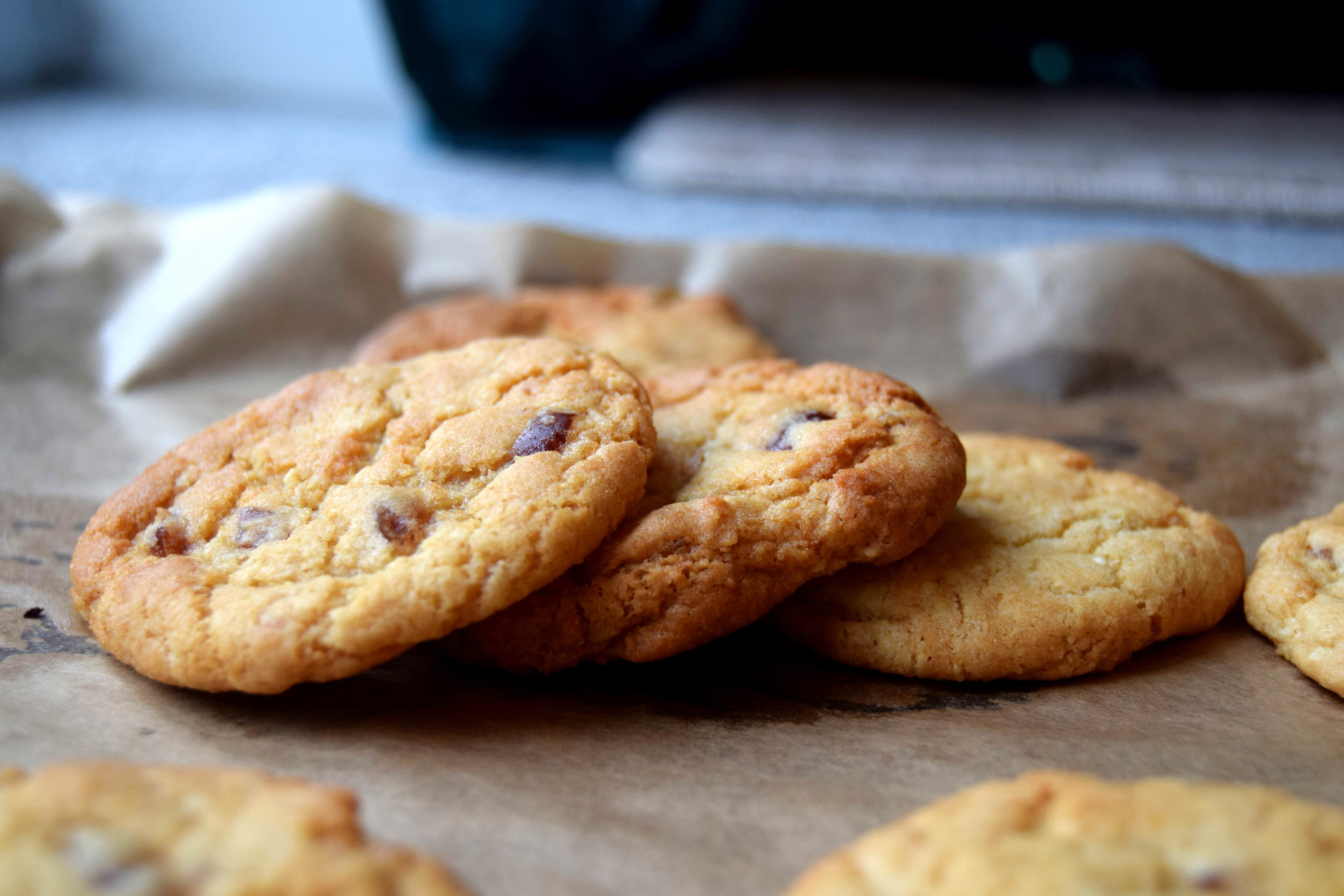 The dough can be made in advance – it needs to chill for at least an hour, but will be happy left overnight if you like! This means you can just bake them at your leisure and have freshly baked biscuits ready for you. These are perfect with a hot cup of tea. 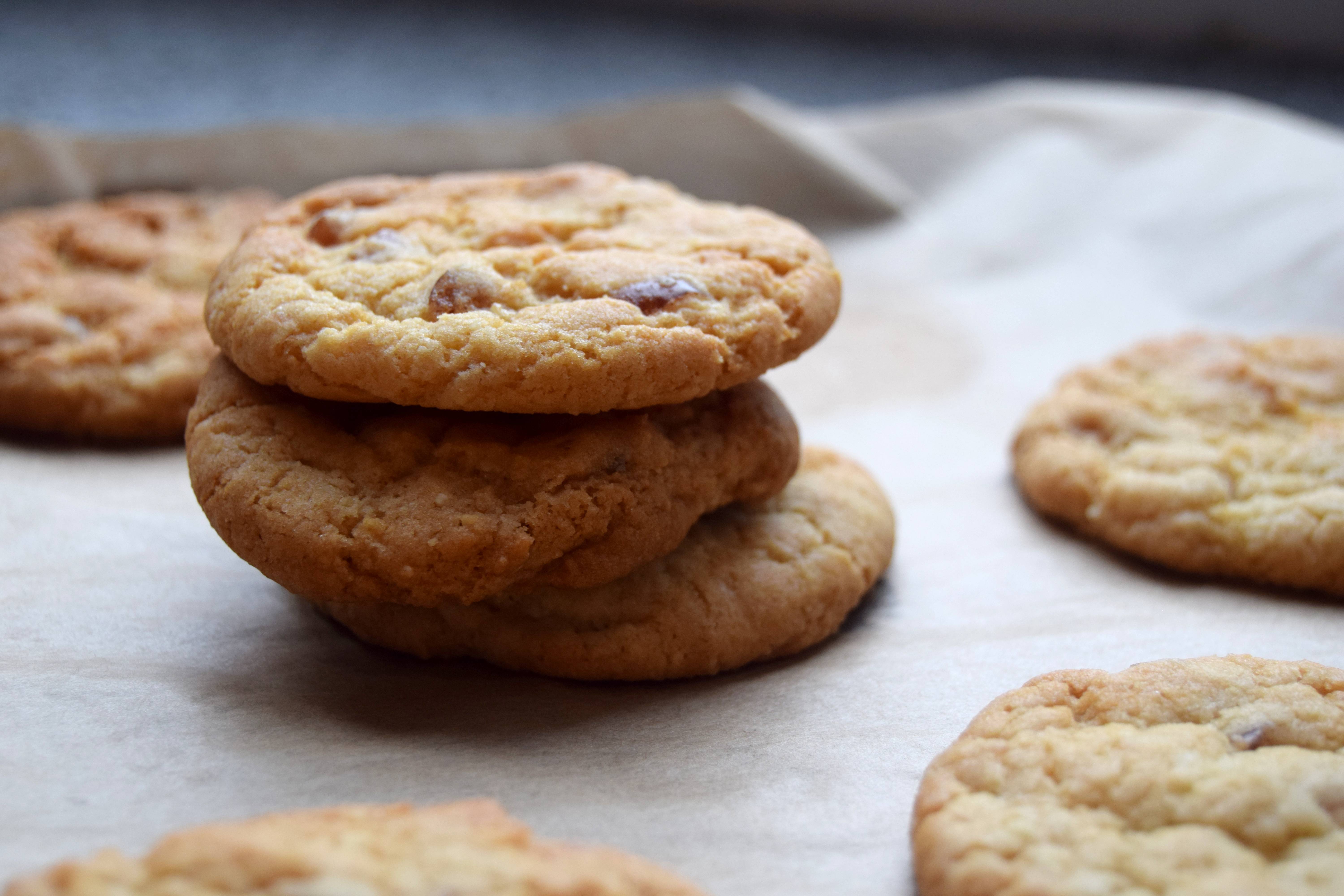 Have you ever heard of the low-FODMAP diet? It’s an elimination diet mostly aimed at IBS sufferers, but can also be used for other chronic conditions. FODMAPs (Fermentable Oligo-saccharides Di-saccharides Mono-saccharides and Polyols) are carbohydrates that have been found to contribute to irritation in the gut in some people – basically, they’re things that people with IBS are often intolerant to. The low-FODMAP diet gets you to eliminate all FODMAPs for a certain period of time, and then slowly reintroduce them, one at a time, so you can figure out what your body can handle. It is a really boring elimination diet – I’ve been on it myself and it wasn’t fun! Here is a list of high, and low FODMAP foods. For today’s VeganMoFo, I made chocolate biscuits that are acceptable on a low FODMAP diet!

I’ve posted a lot of chocolate chip cookie recipes already. Ok, maybe just one or two, but still. How many cookie recipes does a girl need? The answer is most likely, an infinite amount.

These cookies are slightly different though, as for VeganMoFo 18 day 10 we’re going gluten free! As always with making allergen free food you need to check with the person you’re making it for about what they can/can’t eat, and what level of cross contamination is ok for them – I’d classify these cookies as having “no gluten ingredients” because my kitchen is full of wheat products so I can’t guarantee them to be 100% gluten free, but if you made them somewhere without that, they would be!

I wanted to show how easy it is to make tasty gluten free food. I have eaten gluten free in the past when doing elimination diets for my stomach issues and I found that often, gluten free ready made flour works really well in recipes you already have! For this, I used Lidl’s own gluten free self raising blend, which is one of the cheapest, but any pre-made self raising flour would work.

The recipe is mostly based off my regular cookie recipe and it works pretty much the same, although I find the gluten free cookies have to bake a few minutes longer than my usual ones. They are so good that my husband even specifically requests them!

Preheat the oven to 175C/350F
1. Begin by creaming the butter and sugars together until light and fluffy.
2. Next, add the vanilla and golden syrup and mix thoroughly.
3. Stir through the flour to form a stiff dough.
4. Finally, mix in the chocolate chips.
5. Place walnut size balls of cookie dough on a lined baking sheet, leaving space for them to rise.
6. Place in the preheated oven for 15 minutes, until golden brown.
7. Leave to cool on tray.

What can you make with five ingredients or less? Something simple like pasta? Or even just toast, perhaps? I decided, for today’s VeganMoFo prompt, to make it a little trickier and do some baking. I’ve been wanting to make some cinnamon biscuits for a while – I’m in a bit of a cinnamon kick at the moment – and this seemed like the perfect excuse.

These biscuits are crispy and crunchy, spiced with plenty of cinnamon and packed with oats – which I think go really well with the cinnamon flavour. They’re rolled in sugar before baking which helps get that crunch through them.

This month’s MiniMoFo theme is “Literary Inspiration”. If you know my reading habits, you’ll know I am a huge Discworld fan. I’ve even used the series in a previous VeganMoFo post! If you’ve not read Discworld – what are you waiting for? Terry Pratchett’s writing is astounding in its ability to be both fun and serious at the same time, to involve so much detail and yet be enjoyable to read, and to ultimately make you feel at home in his world.

Ankh-Morpork, the central city in the Discworld books, may remind you slightly of London, or perhaps some other city in which you grew up, just with magic and trolls. This recipe hails from there, adapted from Nanny Ogg’s Cookbook (yes, there is a Discworld cookbook) where it is described as “hot, sweet, and cheap. Just the thing for a snack in the middle of a night shift”. Now, I don’t know about night shifts – but I do know these are great for that warm, cosy feeling you get as the nights are drawing in and winter is looming in the background. There’s something about jammy desserts that gives off a relaxing vibe.

Now, I used a few different sorts of jam for these cookies, because I always have jam around and I thought it’d be fun to try several flavours, but you could just use one flavour if you like. I love how these look like kind of jewels on the plate!

One thing to be aware of when making these biscuits is – don’t put too much jam on them! You want enough that you can taste it, but if you put a giant dollop on, then it’ll pour over the edge of the biscuit and burn in the oven – and burnt jam is not very nice. Just make a little dip in the middle of the biscuit, and fill that with jam, and then you’ll have lovely not-burnt biscuits!

Is there much better than a freshly baked chocolate chip cookie? Not really. Cookies are perfect to just eat as they are, or to bake up and take to an event. That’s where these cookies come in – and this month’s MiniMoFo too! These cookies are great to pack up and eat outdoors, I took them to a family do and everyone enjoyed them.

The idea for these cookies actually came from Reddit, of all places, where I saw a recipe that used a mixture of baking powder, water, and oil as an egg replacer. They mixed it all together and then poured it into the dough, but I found it worked just as well – if not better – put straight into the mixture.

These cookies are perfectly crispy on the outside, and soft and chewy on the middle. When you first take them out of the oven, they look a little puffed up and underbaked – but don’t worry! Leave them on the tray for five minutes and they turn into the delicious cookies you can see in the pictures.

It’s the last day of VeganMoFo 2016! How sad is that? 😦 I really hope everyone has enjoyed it, and has found some great new vegan friends and recipes this month.

How apt that the final prompt for VeganMoFo this year is about giving. I love giving food as gifts and in fact did a huge order of food gifts for my family this past weekend. I made lots of my Millionaire’s Shortbread and lots of this recipe too.

Introducing brookies! They are a cross between brownies and cookies. I used my brownie recipe as inspiration – these cookies have melted chocolate in the batter which makes them lovely and fudgy – and adapted it into cookie form. And these might be the best cookie recipe I have ever come up with!

These cookies only take 10 minutes to bake – don’t leave them in any longer or they’ll overbake – and are so deliciously gooey and chocolatey that they are a perfect food gift for any chocolate lover. They use aquafaba, which is liquid from a can of chickpeas – read about it in my carob cookies page – which works in place of eggs and keeps them holding together.

It’s the final week of VeganMoFo 2016! Can you believe that? In just a few days it’ll be December, nearly Christmas. Are you feeling festive yet? Or are you a bit of a Scrooge and wish we’d all shut up about Christmas? Well, I’m firmly in the former camp. Christmas is great! If I have to put up with the cold rainy months I am going to enjoy Christmas as much as I can.

Mince pies are something traditionally Christmassy here in the UK. If you’re not familiar with them, they are a dessert – small individual pies filled with “mincemeat” which has no meat but is actually a stewed spiced fruit mix. You can buy it in jars here in most supermarkets (these days it’s almost always vegan) but if you can’t access it, you can make your own. I like to change things up a bit, so in the past I’ve made Mince Pie Cupcakes using mincemeat, and this year I made cookies!

These are simple cookies to make, with added mincemeat and mixed spice. “Mixed Spice” is something that you can buy easily in jars here, but if you can’t, it’s a mix of cinnamon, nutmeg, allspice, cloves, and ginger. If you’re in America, you could sub pumpkin pie spice, which I believe is a very similar thing.

I like to chill the dough for these cookies in the fridge for half an hour before baking. This makes it easier to shape the cookies onto the baking tray, but you don’t need to do this step if you are impatient.

Today’s VeganMoFo prompt is to make something in greyscale, or black and white. As with yesterday, I must admit I uh, strayed a little from the prompt. I tried taking photos in black and white and they just didn’t look very good. And as for actual black and white, well the black tends to come from when I forget about whatever is cooking on the hob…

So I am going for the next best, two contrasting colours (and flavours), chocolate and vanilla! These are the same flavours as used in black and white cookies so I think I’m ok.

I make them with icing sugar (or powdered sugar for the Americans!) which gives a smoother, almost fondant like texture to the cookie, and these are great little cookies to snack on or give as gifts!