Hello! Today’s post is just going to be a quick one because it’s not really a recipe – just a simple step-by-step guide I made on my phone today!

Something vegans can often miss is chocolate bars. Whilst you can buy imitations of popular non-vegan treats (Go-Max-Go bars are great!) they tend to be a lot more expensive than their non-vegan counterparts and that’s just no fun. So, I’ve come up with a quick little tutorial for making a cheap and easy vegan counterpart to an old favourite – the Kit Kat! This also ties in as a (second) post for VeganMoFo’s January “Something New” prompt. 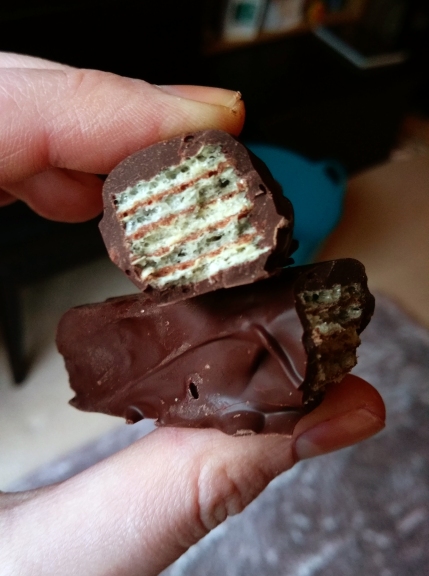 The hardest part of this recipe probably will be finding the wafers to go in the middle. Unfortunately I can only speak for my UK vegans, but in Home Bargains stores around the country, they have had vegan chocolate wafer packs for sale for the last couple of months – at a bargain price of 39p a pack!

Please excuse my chocolatey fingers in the above photo. These are the wafers you want to buy. I’m not sure where else you can get them, but if you are near a Home Bargains pick up several packets because they’re lovely! 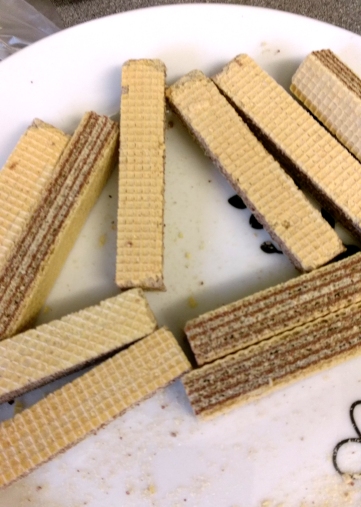 Step 1: Break the wafers into individual bars. Do this over a plate because they can crumble a little.

Step 2: Melt some chocolate. I use Lidl Dark Chocolate – it’s only 30p for a 100g bar and is vegan and tasty! Use 3 bars for 1 pack of wafers. Break them up and put them in a bowl, then put that in the microwave for 30 seconds at a time, stirring afterwards, and repeating till it’s all melted. Drop in a wafer biscuit. 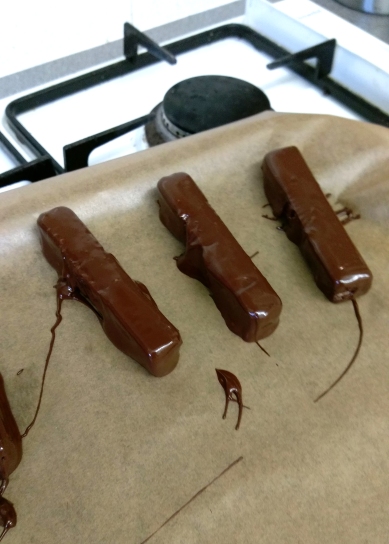 Step 3: Turn the wafer around gently in the chocolate with a fork until all the sides are covered. Lift it out of the bowl on the fork, and hold for a few seconds to allow excess chocolate to drip off. Place on a tray lined with non-stick baking paper.

I hope you enjoyed this small post! I apologise for the phone photos, but since this is such a quick and simple thing to make, the photos match!

Confession: I’m not much of a coffee drinker. I know, in this world full of Starbucks and Costas that’s pretty shocking, right? The thing is, I can’t do caffeine, and getting decaf and vegan options at a coffee shop is always a little risk for me. So, I don’t really drink much coffee. This doesn’t mean I think coffee tastes bad though. One thing I really love is coffee cake.

When using coffee in things like cakes, the easiest way is to use instant coffee. You don’t need to worry about posh tasting coffee because in a cake, you can’t really tell, and instant coffee gives you the ability to just dissolve some in water to get the amount you need. You can make a really concentrated coffee that flavours your cake well without adding too much extra liquid. However, if you don’t have access to instant coffee, you could make up a really really strong cup of coffee and use a similar amount, liquid wise.

To make the caramel sauce, I boil together some vegan butter, sugar, and golden syrup in a saucepan for five minutes, then add a little milk (I used almond milk) and beat it until it thickened up. I used an electric whisk for this because it makes it easier, if you want to do it by hand, use a wooden spoon and beat for a while until it is thickened and opaque. 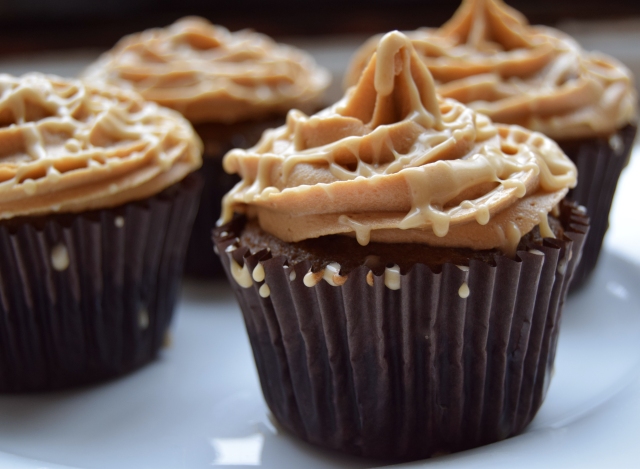 For the Caramel Drizzle

Happy New Year, everyone! Christmas is over, holidays are over, and we’re left with…January. Here, January is wet and grey and cold. Social media is full of people talking about diets, cleanses, and all that stuff – eating lots of salads and fresh produce. Now…if you’re into that, it’s fine. But it’s cold, it’s miserable, who wants to eat a salad? You need good warming food!

January is also the month of all things new. A new year – yes, 2017 already! Veganuary is pretty big, with over fifty thousand people pledging to go vegan this month. And VeganMoFo has a new MiniMoFo challenge for this month!  They’ll be releasing monthly themed challenges throughout the year, with this month’s theme being to Try something New.

If you’re a regular of my blog (if not, hi and welcome!) you’ll know that chickpea flour isn’t really new to me. I’ve made pancakes and fritters with it for past VeganMoFos, but this is the first time I’ve ever scrambled it! The idea came a week or two ago, when we wanted a fry-up (complete with vegan bacon, hash browns, roasted tomatoes…) but had no tofu to make tofu scramble. I’d vaguely seen chickpea flour being used as a scramble before – and I knew it set up nicely when making pancakes and fritters – so…why not? And it worked.

For this version though, I wanted to add flavour to it and make it stand on its own. To brighten up the January coldness, I made it into a curried scramble. Complete with vegetables and spices, this makes a lovely meal on its own, or served (as I did) with vegan sausages, or even split into more portions as part of a cooked breakfast.

Vegetable wise, I used peas, cauliflower, and tomatoes, which lend themselves well to curry flavours, but you could use whatever vegetables you fancy, just make sure they’re cooked or at least blanched before you add them to the pan. 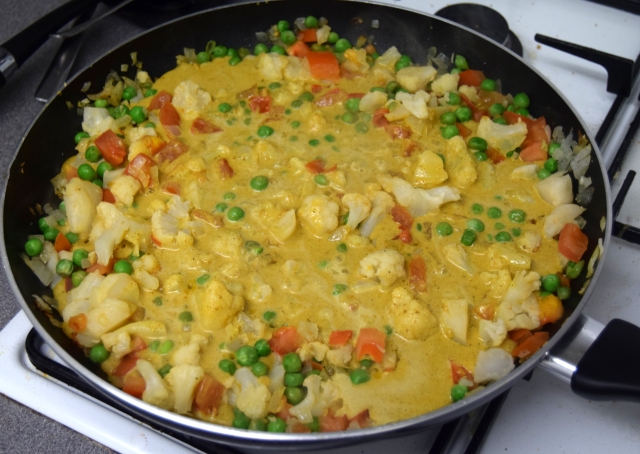 The first step is to fry off onion and garlic until cooked in a pan, then add the vegetables. This cooks for about five minutes, while you make the batter – which is just chickpea flour, spices, and cold water, whisked together until smooth. Then, you pour this batter over the vegetables in the pan, and leave it till it starts to set around the edges.

The next part is the fun part, scrambling! I use a spatula for this as it’s easiest, and just mix and mix. Break the batter up, let it cook a bit, and break it up again.

Keep scrambling for 5-10 minutes, until the scramble is not liquidy anymore and has broken into nice little bits of chickpea scramble! Taste it for seasoning, and finally, serve.