I have been seeing “ginger crunch” around lately. Until recently I never heard of it, but I guess with the internet ideas spread. Apparently it is an old recipe from New Zealand, originating sometime in the early 20th century. I will be honest, I don’t know much about New Zealand cooking – to be honest I don’t know much about many world cuisines. But this sounded interesting, I like gingerbread, ginger cookies etc…so why not give it a go? I found a recipe analysing it out which I loosely followed, although I couldn’t resist adding tweaks of my own!

You have to start off by making a shortbread like base. I decided to mix things up and add a little crystallised ginger into the base, for an added “zing”.

I blended it in the food processor, making it into a sort of sweet ginger paste.

You follow the usual stages, creaming butter and sugar, after which I mixed in the ginger, and add flour and baking powder (baking powder is not usually used in shortbread as it doesn’t usually rise, so that’s a difference here). You can also add ground ginger powder to spice it up a bit more.

At this stage the mix is very like a shortbread dough, super crumbly – you can barely call it dough.

Similarly to shortbread, you then press the mixture into a rectangular pan, and bake it in the oven. I baked mine for 20 minutes until it came out lovely and golden brown.

Next step is to make the icing. This is where it gets “strange”. You have to make, and ice the biscuit, while it’s still hot. You make the icing by mixing icing sugar, butter, and golden syrup together and bringing it to the boil.

Let it boil for a minute or two, then bring it off the heat and stir or whisk for another couple of minutes. This is a technique I learnt making fudge – you have to whip it a little as it cools to let some air into it.

Then, pour the hot icing onto the hot biscuit.

The next bit is important. Leave it to cool! Don’t be tempted to cut and taste or anything. You need to leave it in the tin to cool, until it’s cool enough to put in the fridge (once you can hold it in your hands without being burnt, then put it in the fridge). Put the whole thing, tin and all, in the fridge until it’s stone cold – a few hours should do the trick.

Once it’s cool, take it out of the tin and cut into slices. They should be pretty small because it is quite rich. But very tasty. And slightly sticky, but sticky is good!

You end up with a lovely biscuity base with a sort of jam-like topping. Mmm!

Many thanks to www.foodlovers.co.nz for the recipe base!

Greg and I decided to explore the more rural areas round here.

Turns out that all you have to do is turn off a short way down the road and we’re in the middle of woodland!

We have trees right behind our house so it’s not unexpected. But to be able to walk through was lovely. We’re having a bit of a butterfly epidemic at the moment (I blame all the buddleias here) so there were loads flying around!

We came across a little stone bridge that goes over the “Black Brook” which passes our house.

Our old house was nearby a canal, which was lovely to walk down, so it’s nice to have some water around!

Finally we came to the Stonebow Washlands which are a man-made set of three small lakes created in order to provide “flood relief, public space, and wildlife habitat”.

And all this in a ten minute or less walk from our house!

I decided to walk into Loughborough town to “explore” – to see the route to get there, to find out what shops are like, and just to get out for a walk.

I used Google maps to walk there because I am completely abysmal with directions. Ask anyone who knows me, usually if I say “I think it’s this way” the safest bet is to go in the opposite direction! But anyway it turned out to be about a 2 mile walk into town, not bad really except the day was a scorcher and I thought I was going to melt at several occasions!

Typical me, I found the library first off. After that I went over the road as there seems to be a park there, called Queens Park.

After living near Abbey park in Leicester it’s nice to know there’s another pretty park near here! It seemed quite busy but it is the school hols and I guess everyone was making the most of the nice weather!

I went into town and checked out the shops. Loughborough has a Holland and Barrett (thank goodness) but I didn’t go in as they’re usually one and the same. I found a health food shop called, wait for it, “elf foods”

I didn’t get much because I didn’t want to spend too much but it looks like a wonderful shop! It sells all the usual things, vegan stock and ice cream and stuff, but it also has a “bulk buy” bit with nuts and seeds and dried fruit. I am sure I’ll be back in there to spend more money soon (don’t tell the husband!).

So for my first recipe post I’m going to cheat a little. This isn’t my recipe, it’s my mums! In fact, I think she got it from a school recipe ages ago, but it’s still hers.

I wanted to test out the new oven and see if I could get it to work (spoilers: I did, eventually) and when I found that Morrisons do chocolate chips with no dairy, well, obviously I had to make cookies!

The good thing about these cookies is they make an AMAZING cookie dough. You could eat it out of the bowl, spoonful by spoonful, easy peasy.

Shh, I only had a little!

But for the purpose of testing the oven, I have to bake them.

So I put them on a tray,

And put them in the oven. Now, being that I have no idea how the new oven cooks things, and also that I do NOT like failing at a cooking project, I spent the whole cooking time like this:

I realise how tall I look.

But hooray! They worked.

So here we are! All moved in. That was exhausting.

We collected the keys at 9.15, had a look around and set up our TV (we brought that ourselves so it didn’t get broken!). Then we went back home – or should I say, old home – to finish our packing, tape up all our boxes, and do our goodbyes to the house. The moving van came at 1pm, and they were really wonderful. Everything was in our new home by 3! Not bad at all.

Then the mammoth unpacking task started. Eeeeverything had to be unpacked, found places for, etc etc. Moving is tiring business.

We finished off this morning as Greg took the morning off, and as of writing this – all is unpacked! I leave you with a few photos of our new home! 🙂

Our garden – not very big but nice with a patio area. Apparently there’s a walking trail behind that we’ll have to go on sometime!

Our little seating nook. The living room is muuuch bigger than we are used to but it’s all good!

Check us out , three bookshelves eh! We’re going to put perhaps a dining table here. Proper posh and all.

That’s it for now. The kitchens a bit of a mess because at the moment there’s two washing machines hanging around and a dishwasher (long story) but stay tuned as I’m about to test out the oven by making cookies! 🙂

So we are moving on Tuesday and this is what our house looks like at the moment! 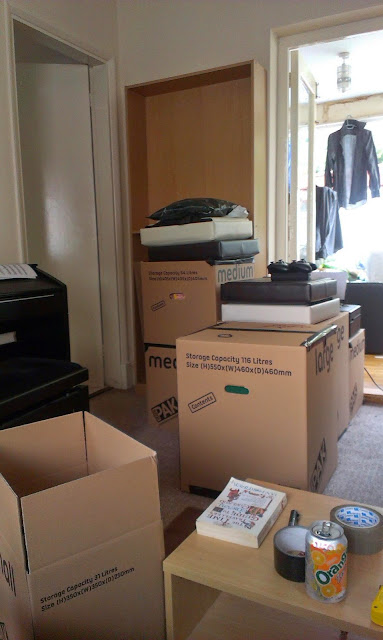 So I am part of the way through an Open University History degree (I’ve done 4 years out of 6 required).

This past year I just finished A200 Medieval to Modern history – a notoriously hard course!

I was pretty pleased with my coursework score of 74 – which would put me at a Grade 2 pass or a 2:1 degree classification.

But I logged on today to my “A200 Result available!” page to see this:

Not bad, perhaps, considering on my Facebook group most of us are getting much worse scores than in our coursework – still a bit of a disappointment though.

However if I buck up and get good scores on my final two modules I can still bump my score up overall. Here goes lots of study!

Next years course is on Empire – all sorts.

Today we went into Norwich.

First of all we visited Norwich Castle. The castle, from the outside, is not ornate or anything “pretty” – in fact it looks like a prison, which is what it was used as for most of its history.

The castle was built by order of William the Conqueror in the eleventh century AD, however from the thirteenth century onwards it was used as a jail, up until it’s conversion to a museum in the late 19th century.

The castle now is a museum, with a miniature recreation of the original Norman layout inside – it’s quite interesting as I don’t know much about the Norman period. However the castle was full of a group of schoolkids so it was quite noisy!

After we went to the castle we had lunch at Pizza Express. I had the new “pianta” pizza which is a new cheeseless option. It’s good to be able to order a pizza that’s meant to not have cheese on, and this pizza was tasty though quite spicy.

The leaves are rocket on top! It had artichokes, mushrooms, pine nuts, and a spicy tomato sauce base.

Today we went on a trip to Cromer.

Cromer has been a popular seaside destination for over two centuries – even mentioned by Jane Austen as a great sunbathing spot! It’s easy to see why when you visit – miles of beaches, a lovely pier, cliffs, and many nice small beach villages nearby. Being a popular resort however has the drawback that it can get horrendously busy.

I was expecting Cromer to be quite busy today as the weather was beautiful, but luckily it’s not the school holidays yet and it seemed to be quite empty. The sky was blue, and, quite surpisingly – so was the sea! I don’t think I’ve ever seen the British sea so blue and beautiful! Usually it is a sort of murky grey colour but today it was stunning. We even went for a bit of a paddle!

Today we went to Hunstanton.

We’ve been a few times before, but every single time we’ve been together it has been raining. The first time we went as a couple, we took this picture:

Shows how wet and rainy it was! It was in August last year – so still summer time, but everywhere was closed, all the shops were shut, it was pretty much dead.

Today – no such thing! The weather has been stunning, and it’s warm and lovely. Of course there is always a breeze at the sea which was nice, but it was hot, sunny, everything you don’t expect the British seaside to be.

Just to prove it we took this picture:

Can you spot the difference?!