This month’s MiniMoFo theme is “Literary Inspiration”. If you know my reading habits, you’ll know I am a huge Discworld fan. I’ve even used the series in a previous VeganMoFo post! If you’ve not read Discworld – what are you waiting for? Terry Pratchett’s writing is astounding in its ability to be both fun and serious at the same time, to involve so much detail and yet be enjoyable to read, and to ultimately make you feel at home in his world.

Ankh-Morpork, the central city in the Discworld books, may remind you slightly of London, or perhaps some other city in which you grew up, just with magic and trolls. This recipe hails from there, adapted from Nanny Ogg’s Cookbook (yes, there is a Discworld cookbook) where it is described as “hot, sweet, and cheap. Just the thing for a snack in the middle of a night shift”. Now, I don’t know about night shifts – but I do know these are great for that warm, cosy feeling you get as the nights are drawing in and winter is looming in the background. There’s something about jammy desserts that gives off a relaxing vibe. 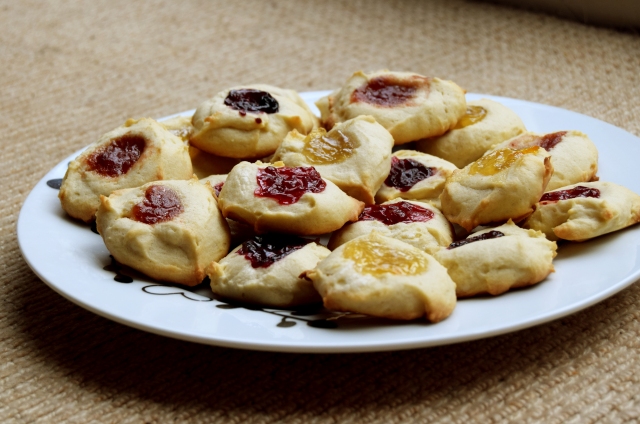 Now, I used a few different sorts of jam for these cookies, because I always have jam around and I thought it’d be fun to try several flavours, but you could just use one flavour if you like. I love how these look like kind of jewels on the plate! 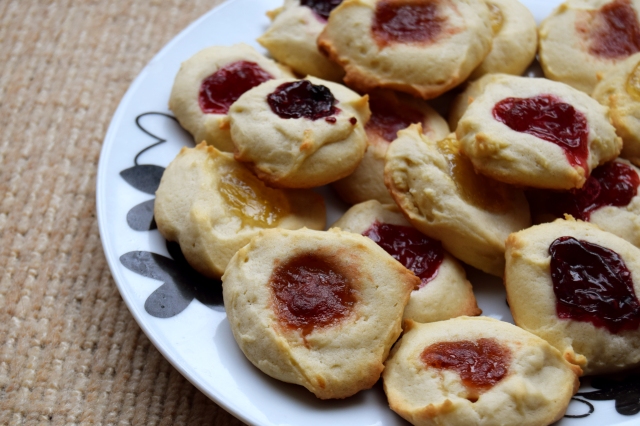 One thing to be aware of when making these biscuits is – don’t put too much jam on them! You want enough that you can taste it, but if you put a giant dollop on, then it’ll pour over the edge of the biscuit and burn in the oven – and burnt jam is not very nice. Just make a little dip in the middle of the biscuit, and fill that with jam, and then you’ll have lovely not-burnt biscuits!

Let the chives flower in my herb garden - I don't use them often and the bees love them 😍 Also got a nice little clock/thermometer to hang up as well, the thermometer isn't very accurate when it's in the sun but it's still pretty, and the clock works! 🌼
Don't know how it's back to cosy cardigan weather but hey 😅 How is everyone dealing with lockdown? I'm feeling a little aimless - I can't do my volunteer job, and I don't have a paid one (and it may now be impossible to get one) so I'm in a bit of a limbo! But at least the garden is weed free for once?
Yes I pretty much am just baking all the time now, but hey, why not? Plus my husband is home all day, and apparently he is used to free office snacks so everything I make just vanishes very quickly. This time I went for brownies! These are the "bourbon biscuit brownies" from my blog except I used oreos in them. Actually, this time, I used half self raising flour and half bread flour because that's all I had. I have loads of bread flour now, but I'm rapidly running out of yeast... I cut these ones into mini squares for bite size snacking!
Tiffin! 🍫 A no bake, no flour snack! And you can use such a variety of ingredients. This is "marshmallow tiffin" from my blog, but I've made it without marshmallows and it's delicious too. Use different types of biscuits in it for different flavours - bourbons are nice, oreos are nice, you can even use ginger nuts for a ginger flavour 😋
Where has the lovely sunny weather gone? ☀ Now it's chilly and windy and I miss the warmth 😂
Pretty little walk around Mackworth and Markeaton while the sun lasts ☀
Definitely getting @thevegancakery withdrawals with the lack of fairs about, so when @ecologist_to_be offered to share her order in return for driving around and picking up vet stuff 🐦 I couldn't say no! Cream doughnuts and mille feuille, the perfect sunny snack 😍
Hands up for sweets! My sweet tooth is not at all secret, almost all the time I will choose sweet food over savoury. I even like sweet potatoes better! So of course I had to order some sweets to keep me going. @sweetyourselfvegan let you choose your own pick n mix, just like you did as a kid in Woolies, which is great as you can do like me and get all the bubs 😍 Funnily enough, a little known fact about me is that I have a stomach condition that causes chronic nausea, and often times many food makes me worse...high fibre foods are a big no for me (I don't always do as I should but still) but in times when I can't eat, sweets are a low fibre energy source that don't make me ill! So they're pretty much medicinal at this point.
A few days ago ☀ So happy to discover some countryside footpaths pretty much on my doorstep! I've been missing the country so much, but finding some nature to walk in has cheered me up.