Today’s VeganMoFo prompt is all about the worst catered meal you’ve ever had.  When you’re vegan, often it seems that chefs just go “umm?” and throw a vegetable at a plate. In general, I prefer to eat out at places that specify vegan options – or even better, vegan only places – but that’s not always possible. Sometimes, you just have to grin and bear it.

I can’t seem to find a picture of what, in my opinion, was the worst catered meal I’ve had, but I’ll describe it to you. As you may have gathered from the title of this post, it was a lasagne. Lasagnes are usually great, right? Pasta with a nice creamy sauce…mmm. Except this lasagne had no pasta. In place of pasta, it had sheets of celeriac. I really don’t like celery, or celeriac and, yeah, it wasn’t ideal.

So, I decided to make my own version. A better version. I kept with the theme of vegetables – including lots of vegetables roasted for this lasagne, but used actual pasta, and a version of my cheese sauce to go with it. As you can probably tell, I didn’t have the best luck with the photos for this post – the light was dark (oh, autumn…) and lasagne unfortunately just isn’t that pretty. It was tasty, though! 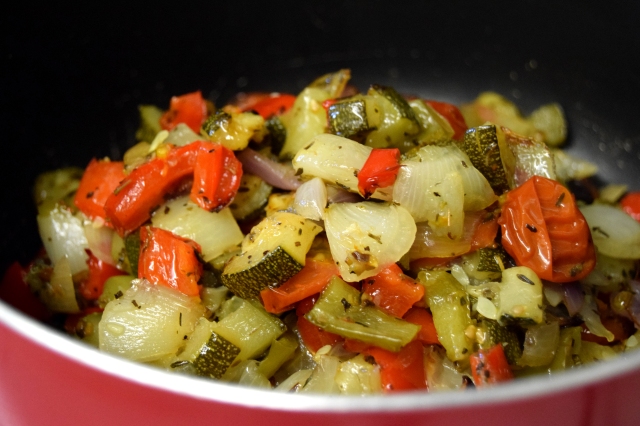 The roasted veggies that go inside are pretty good looking though, don’t you think? I had a hard time not just eating them fresh out of the oven. They get roasted first, then cooked into a tomatoey sauce, which is used as the lasagne sauce. Then, you make the cheese sauce, arrange it all in a pan, and bake it in the oven!

For the vegetable sauce For the cheese sauce