Today’s VeganMoFo prompt is about holidays, so I chose a holiday I love to make food for – Christmas! Now, it’s a bit early for me to be making mince pies or Christmas pudding truffles, so I chose to use the flavours of Christmas to make an everyday meal. 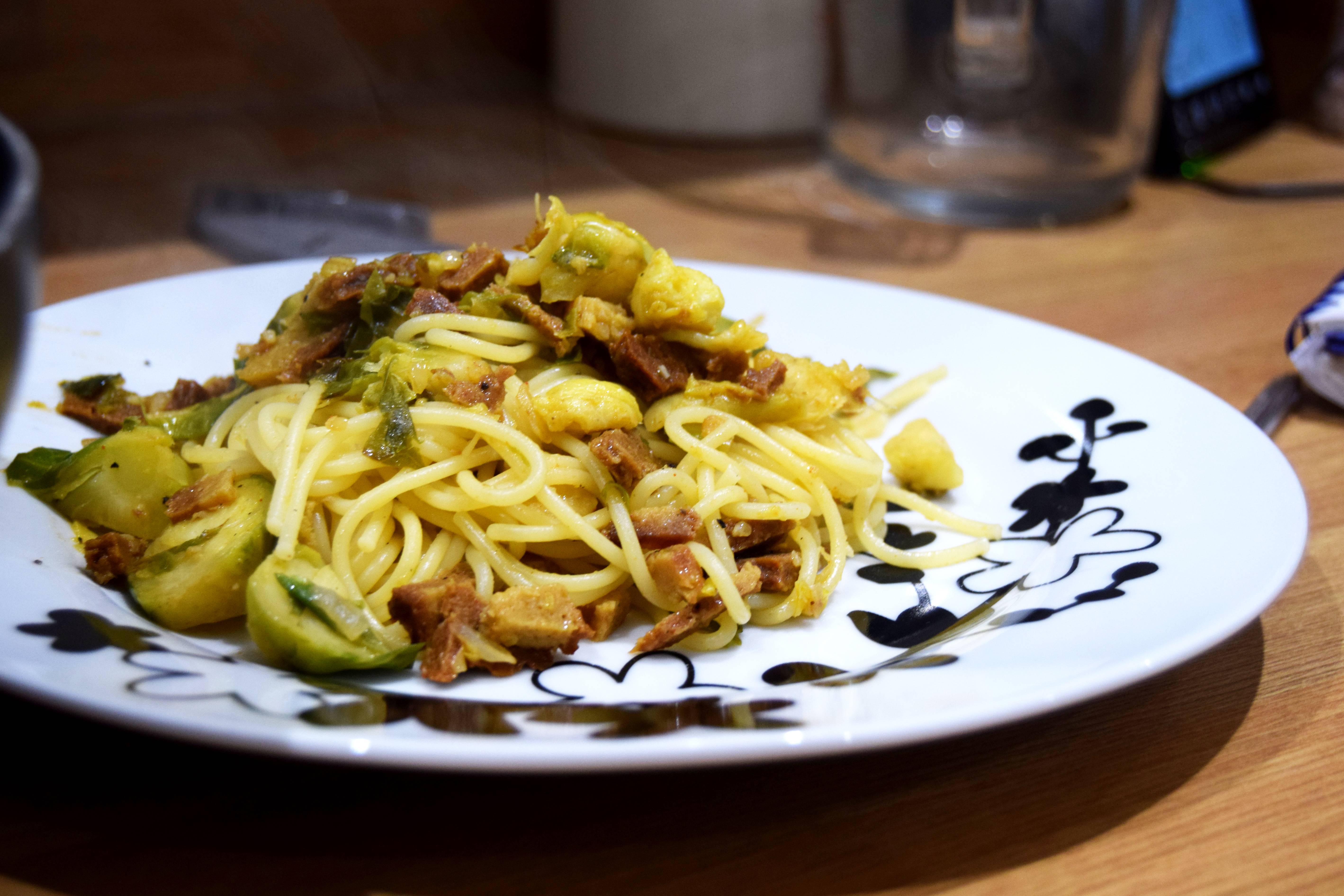 Brussels sprouts are an integral part of Christmas dinner, and if you cook them right (roast or fry – don’t just boil!) they are delicious. I often have a bag of frozen brussels in my freezer which I use year round. For this meal, I used those (defrosted first), but you could use leftover ones from Christmas too! 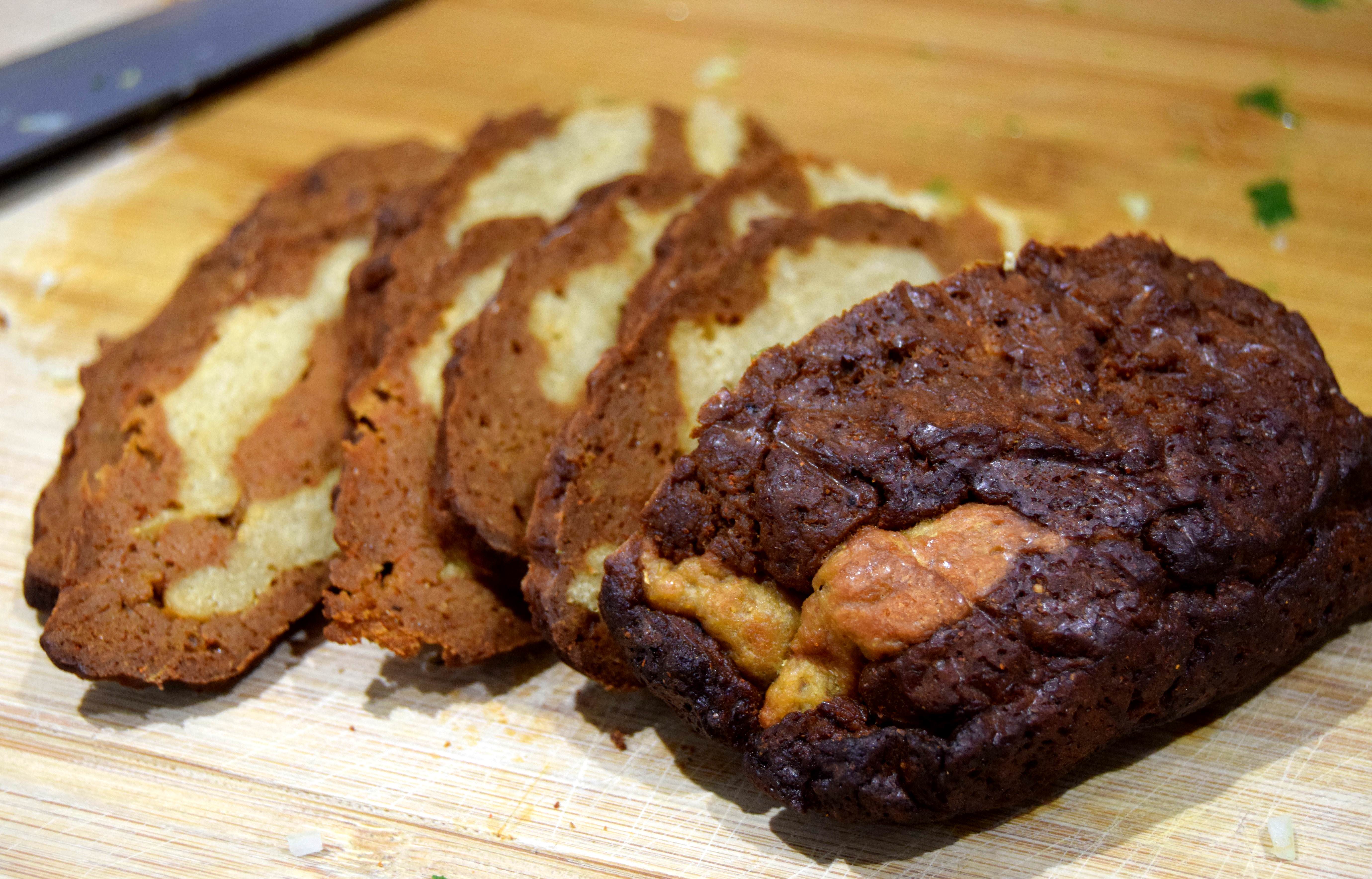 I used vegan bacon in this recipe too – yes, two days running with vegan bacon, but the recipe I use for seitan bacon makes enough for more than one lot, so I use the rest! It’s a great recipe and one I make regularly. Saves having to buy premade stuff (plus you get more to snack on here!) 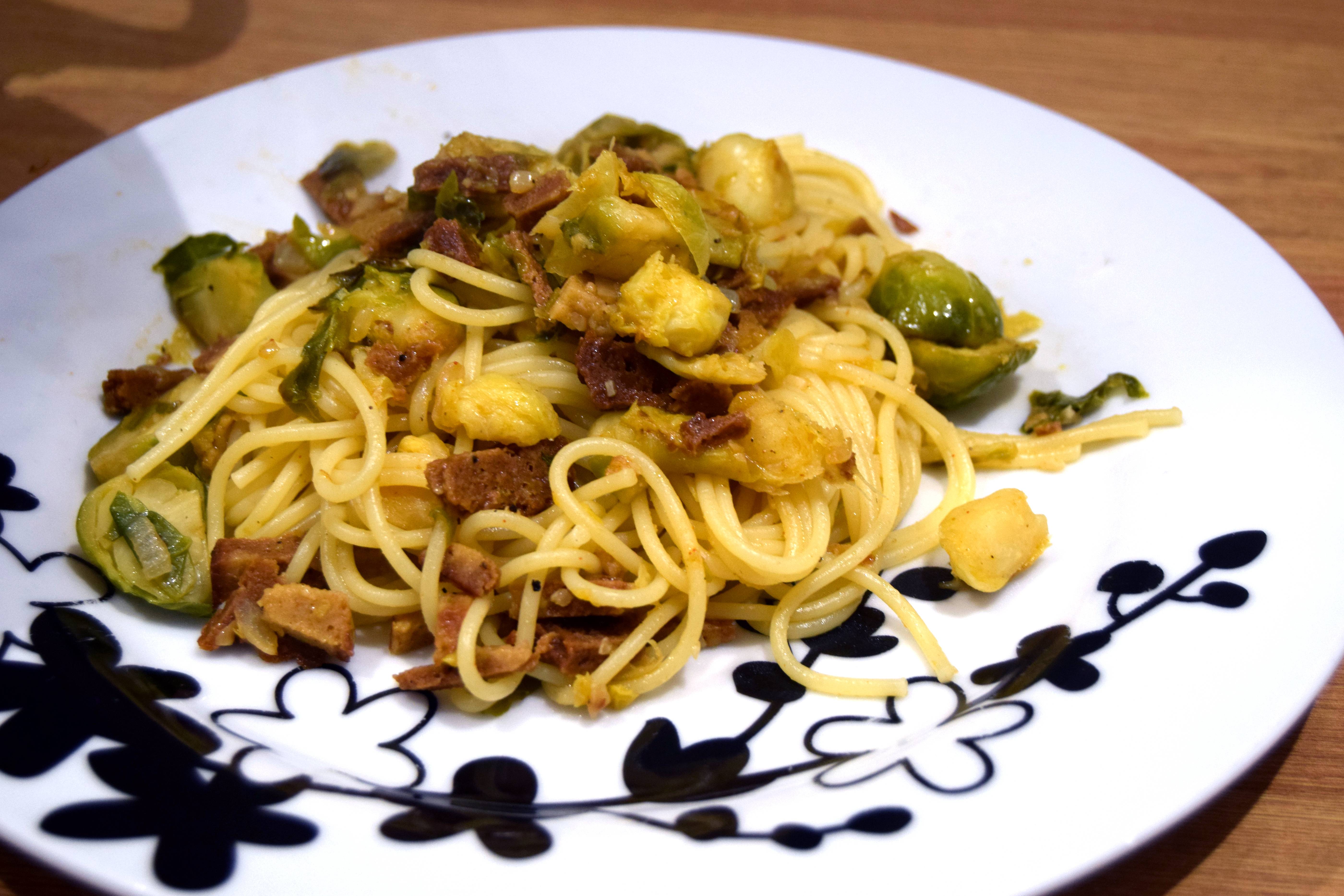 Today’s VeganMoFo post continues on from yesterday’s post…yep, we’re using leftovers! Presuming you didn’t eat all eleven of the sausages you made at once (no judgement, they’re good!) you can use them in this recipe. You could use shop bought sausages too, but for frugality purposes I used my own. 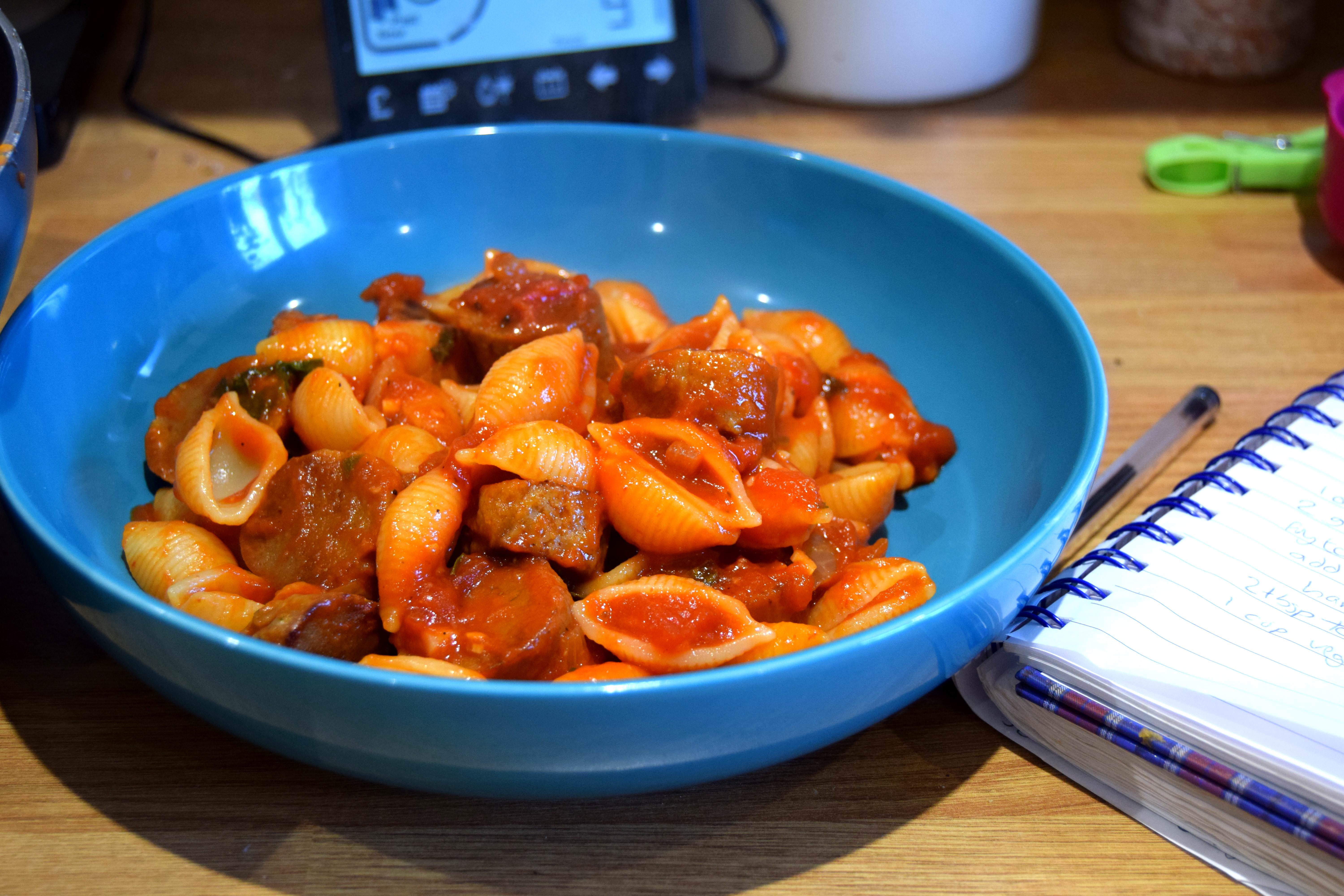 This recipe is pretty simple, but it’s one of our go-to recipes for a quick and easy meal! If you don’t have leftover sausages, I’ve used beans, or different types of fake meat too – burgers can be chopped up and used! 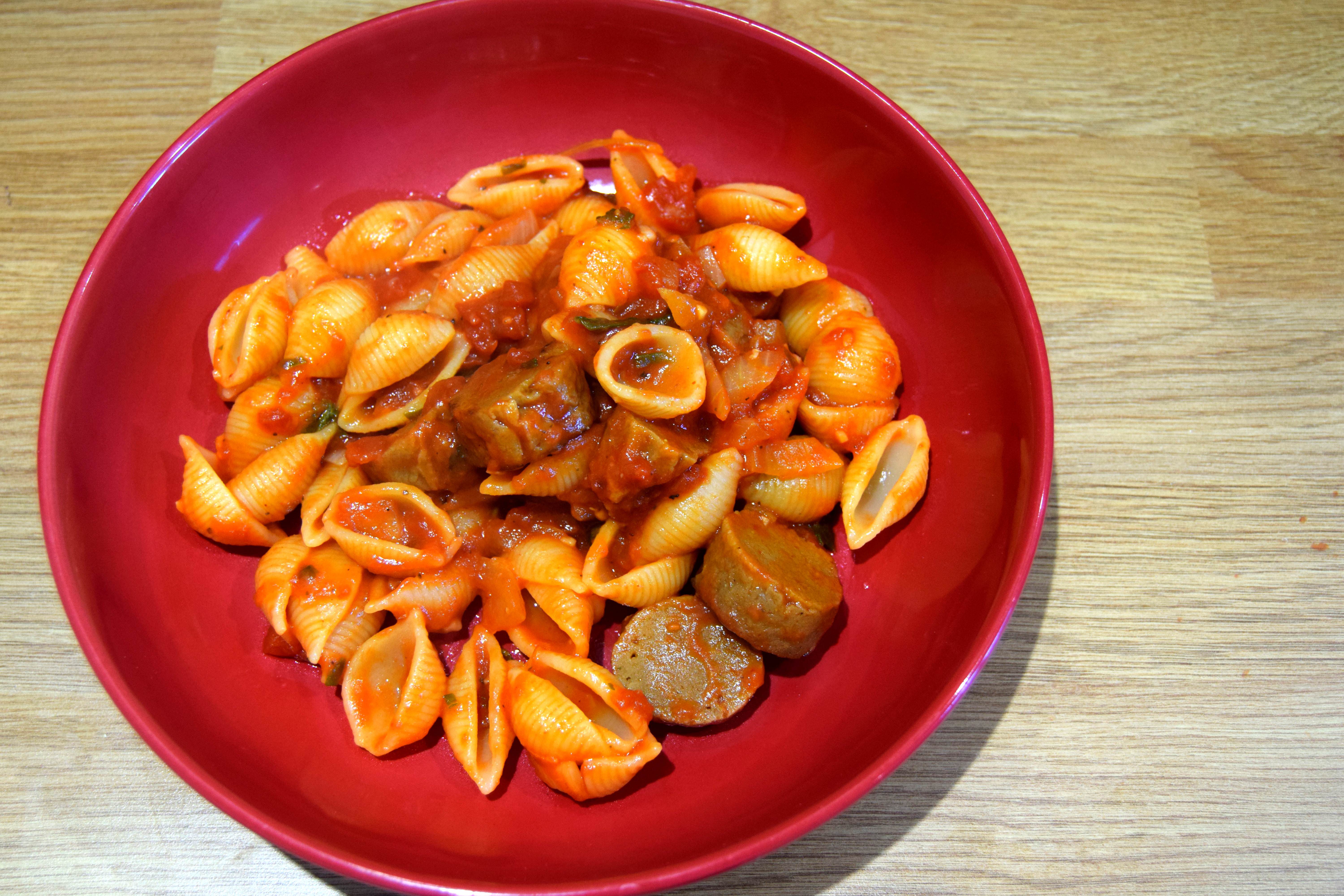 I actually used fresh basil in mine – I have a basil plant on my kitchen windowsill, I bought one of the cheap “living” pots you can get in the supermarket and repotted it, they’re usually still living but need a much bigger pot than they came in! However, dried basil also works find and is what I use when I don’t have fresh basil! 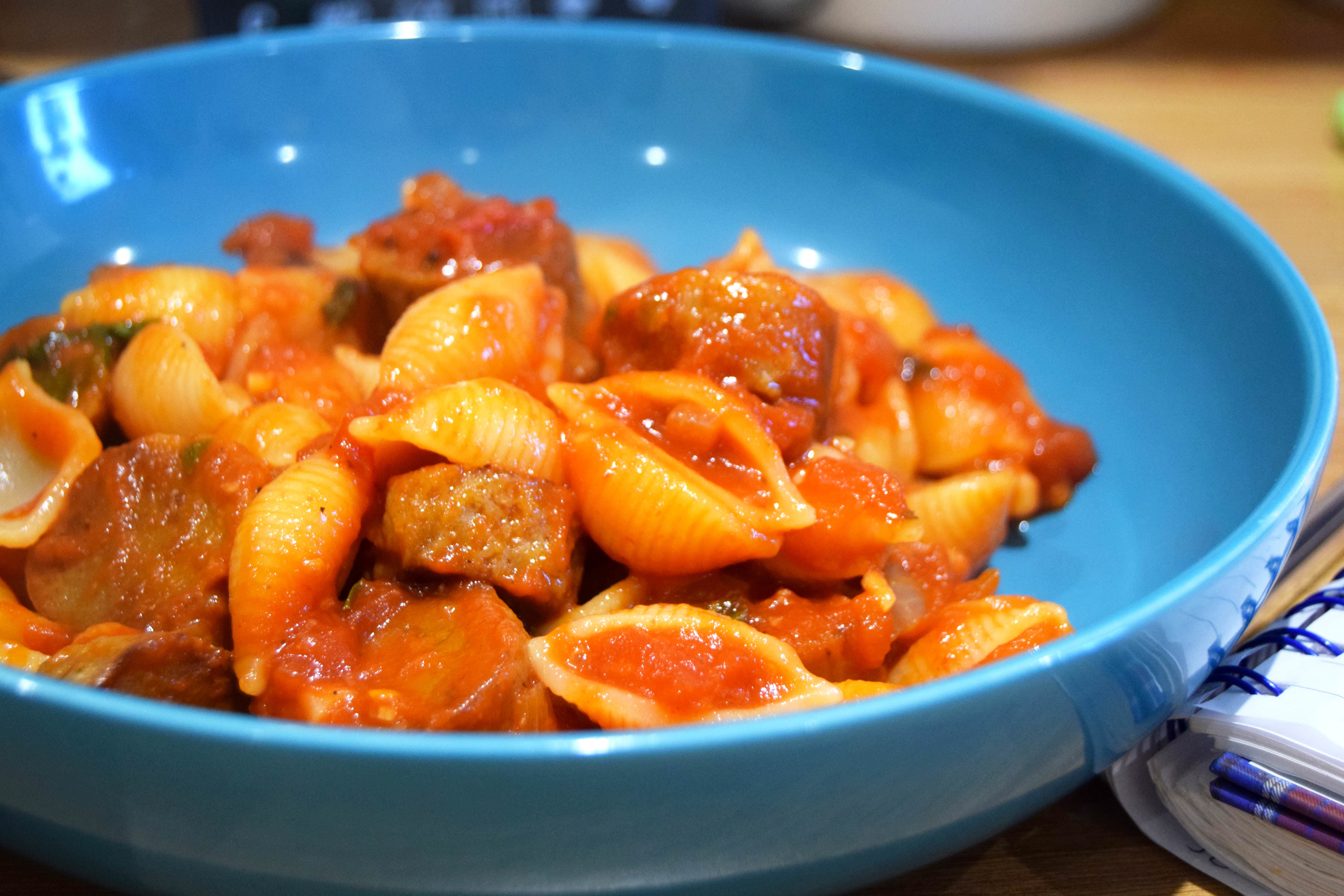 It’s the beginning of Week 3 of VeganMoFo 2018, and this week is Budget Week – where we aim to create meals that are both delicious, and budget friendly. A common criticism against veganism is that it’s expensive – and it’s true, if you’re constantly buying artisan vegan foods and treats, it can get expensive. But I’m of the opinion that the same is true of a non-vegan diet too – you could easily spend a lot of money on fancy food there as well! Veganism itself can be affordable and still tasty, and this week will aim to show that!

For the first day of this week, the prompt is “Storecupboard Meal” – making a meal with ingredients commonly found in your cupboards, without having to go to the shops to buy things. I made this spicy bean soup – it’s similar to my borlotti bean soup recipe, but with kidney beans and spices. The addition of pasta in the soup makes it a nice hearty meal and gorgeously warming on cold evenings! If you want it more soupy, just add more water, but I prefer my soups to be really thick.

Today’s VeganMoFo prompt stumped me for a minute – it asks us to make a meal full of flavour, but low in salt – and as someone who has never had to cut down on salt I had to think a bit. It’s important though, I think, to learn how to cook for different requirements, so I gave it a go!

I made pasta with a herby balsamic tomato and white bean sauce. The balsamic vinegar and herbs bring strong flavours which mean the salt isn’t so necessary, and roasting the tomatoes really emphasises their savoury flavour.

I posted roasted chickpeas yesterday, but white beans (or canellini) are another bean that is really good roasted. I often put them in with vegetables to roast as they taste so good!

Preheat the oven to 180C/355F
1. Place the tomatoes, cut side down, on a lined baking tray.
2. Spread the beans, garlic, and herbs over the tomatoes.
4. Drizzle over the oil and balsamic vinegar, making sure to cover evenly.
5. Place in the preheated oven for 30 minutes.
6. Stir through the cooked pasta and enjoy! Great hot, or cold as a pasta salad.

We’re onto week 2 of VeganMoFo 2018! This week is about Dietary Restrictions…which sounds slightly boring but isn’t actually, it’s a good challenge to think about things people can and can’t eat and learn to cook for them. After all, we’re vegans and there are things we can’t eat – shouldn’t we try to be inclusive too?

Today’s prompt is “creamy without nuts”  – a lot of vegan cream/cheese is cashew based, making it unsuitable for those with nut allergies. But there’s an easy way around that – tofu! Using tofu as a cream base is a little old school, but I based it off my gooey cheese sauce which is honestly really good, and has no nuts!

Of course, if you’re cooking for someone with allergies you must be very diligent about what ingredients you use. This recipe has breadcrumbs in – make sure your breadcrumbs are nut free. It’s always better to err on the side of caution when it comes to allergies.

I make up the sauce for this pasta, combine it with cooked pasta, top with breadcrumbs and bake in the oven for a crispy topping. It’s so creamy and moreish!

You could use whatever pasta you want for this – shells would work well – but I used macaroni for the pictures!

It’s Day 15 of VeganMoFo 2017, which means we’re pretty much halfway through (already!). Today is the last day of “behind the scenes” week and it’s all about spices. What spices do we use, and do we have any favourites? Well, I like to use a huge variety of spices. I would take a photo of my spice cupboard, but to be honest it is not very organised and probably isn’t very interesting! So we’ll talk about one of my favourite spices instead: turmeric.

Turmeric is actually really good for you. It’s not just “that yellow powder that dyes your counter when you spill it” (though it is that too). It contains curcumin, which is what makes it so yellow, and has anti-inflammatory effects, similar to those found in NSAIDs like ibuprofen, only without the whole stomach upset those can cause (BBC). It’s been shown to be useful in treating pain and swelling in people with arthritis too, and there are trials ongoing with regards to other conditions!

It also looks pretty cool. I feel like Delia Smith could easily serve this at a Norwich City club meal and nobody would bat an eyelid. Look at that bright yellow!

You don’t want turmeric to be too raw as it can have a kind of powdery taste. So, when you put it into the mixture, you let it cook for thirty seconds before doing the next step. This cooks the turmeric and gives this dish a delicious savoury flavour!

I also have white beans in this pasta which add to the creaminess, and give a nice protein boost – making this really very good for you!

Yesterday, I posted a recipe for cheesy sausage rolls, which are pretty obviously imitating a non-vegan counterpart. They are really delicious, as are a lot of vegan cheese and meat substitutes, but sometimes it’s nice to step away from that and make something that is tasty of its own accord, not because it’s imitating something else. That’s what today’s VeganMoFo prompt is about – making an original vegan meal, something that isn’t replicating a non-vegan food, but is great as it is.

This dish is possibly my husband’s favourite meal. It’s one he always requests, which is great because it is so simple. Fry off onion and garlic, add some chickpeas, vegetable stock, and spinach, and cook it all down a little, then stir through hot cooked pasta! And that’s it.

This recipe also gives me a great opportunity to lament about how much spinach shrinks. Look at this!:

It’s the same amount of spinach in both pictures – just uncooked and then cooked!

Today’s VeganMoFo prompt is all about the worst catered meal you’ve ever had.  When you’re vegan, often it seems that chefs just go “umm?” and throw a vegetable at a plate. In general, I prefer to eat out at places that specify vegan options – or even better, vegan only places – but that’s not always possible. Sometimes, you just have to grin and bear it.

I can’t seem to find a picture of what, in my opinion, was the worst catered meal I’ve had, but I’ll describe it to you. As you may have gathered from the title of this post, it was a lasagne. Lasagnes are usually great, right? Pasta with a nice creamy sauce…mmm. Except this lasagne had no pasta. In place of pasta, it had sheets of celeriac. I really don’t like celery, or celeriac and, yeah, it wasn’t ideal.

So, I decided to make my own version. A better version. I kept with the theme of vegetables – including lots of vegetables roasted for this lasagne, but used actual pasta, and a version of my cheese sauce to go with it. As you can probably tell, I didn’t have the best luck with the photos for this post – the light was dark (oh, autumn…) and lasagne unfortunately just isn’t that pretty. It was tasty, though!

The roasted veggies that go inside are pretty good looking though, don’t you think? I had a hard time not just eating them fresh out of the oven. They get roasted first, then cooked into a tomatoey sauce, which is used as the lasagne sauce. Then, you make the cheese sauce, arrange it all in a pan, and bake it in the oven!

For the vegetable sauce For the cheese sauce

Happy thanksgiving to all the Americans out there! I’m not American, so I had to think a little when it came to finding a thanksgiving inspired meal for today’s VeganMoFo prompt.

It seems that many of the ingredients used in American thanksgiving meals are similar to what we Brits use in Christmas dinners. With a few exceptions like sweet potatoes (and marshmallows?), and nuts like pecans.

I decided to go with what I know – brussels sprouts and cranberries – and add in some American elements – sweet potatoes and pecans. I’m afraid I wasn’t quite brave enough to put marshmallows in my meal.

The meal itself is pretty simple – just roast the veg, toast the pecans, and cook the pasta. Then stir together the vegetables and pasta, and top with the toasted pecans. So much easier than a full roast dinner!

I also topped my pasta with some of the Sainsbury’s vegan Wensleydale & Cranberries, feeling that this was an appropriate usage of a cheese I wasn’t really sure what to do with. It worked well – so if you have any cheese like this, give it a go.

Okay, I cheated a little on this prompt. The prompt is to make food in “a colour you rarely eat” and I just couldn’t think of anything. So I flipped the prompt on its head and decided to go with a colour I always eat – beige. Beige food has a reputation. Fried, carby, bland food is often beige food and this means that beige food has a reputation for not being particularly good. Not so with this meal! It may be beige but it is healthy, packed with protein from the chickpeas, and tastes delicious!

With the addition of tahini giving this dish a nice sharp flavour – tahini pairs so well with chickpeas (see: hummus) and parsley stirred though at the end to lighten it up, this is one of my favourite pasta dishes!

Seen above served with my homemade garlic bread, this meal is so warming and comforting and creamy!