So this recipe is super simple. It’s one you can whip up in no time if you can’t be bothered to do much cooking. It does use a few ingredients that you may not have “to hand” (courgettes, soya cream) but they aren’t that expensive. Literally chop a few ingredients, bung them in a pan to cook, and cook up some pasta…and you’re done. I served it with spaghetti, but regular pasta is cool too. I don’t really know enough about pasta to recommend certain shapes!! 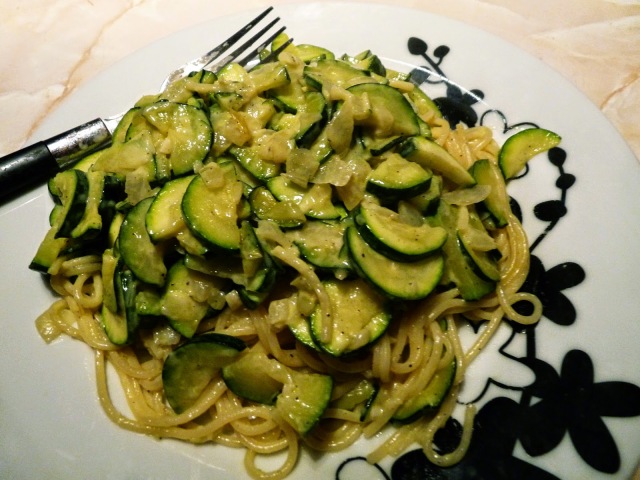 So I had no idea what the Liebster Award was when Rosie from Vegan In Wales nominated me. But she has a cool blog and so I checked it out! It has a set of rules which are as follows:

Here’s what you do when you get nominated for the Liebster Award:

1. Answer the questions given and then come up with 10 new ones to ask your nominees.2. Nominate 8 other blogs, let them know you have nominated them and put a link to their blog in your post.3. No tag backs.4. Nominees must have under 200 followers on any platform.5. You must tell all the blogs that you nominate that you have nominated them.

Seems simple enough, right? Well, I’ll do my best. Here are my answers to Rosie’s questions!

1. If you could bring any one animal back from extinction, what would it be?

Perhaps because I’ve been playing too much Skyrim recently, but I’d say the Mammoth. Yes they’d be absolutely terrifying but I think it’d be really cool to see an animal of that sheer size about.

2. What would you say is the dish you cook most often?

I think possibly this would be my Rosemary & Bean Soup – we make it maybe once a week or a fortnight when it’s not Vegan Mofo time! So simple and easy to make.

3. If a zombie apocalypse was imminent and you could only take 5 store cupboard staples in your bag before fleeing, what would they be?

Haha, I’m imagining there being zombies at the door and I’m there like “hold on, let me search my cupboards!”. But I guess you’d need things that wouldn’t go off, so anything fresh is out. Rice would be good, if I could figure out how to cook it my exile. Lentils too, although they take time to cook they are super healthy! How about spices? Does “spices” count as one or can I only choose one spice? If just one, probably a trusty garam masala mix, or just cumin if you’re being really picky. That’s three…two more. I think I’d take some canned tomatoes, assuming I could also take my can opener, because that’s not food right? I use a ton of canned tomatoes. Also chickpeas, canned chickpeas. I’ve never used dried chickpeas and wouldn’t know how, so canned would be best!

This made me realise I totally don’t go out to eat much at all. I’m not even sure I have a favourite restaurant. One place we do like going is Mithaas on the Narborough Road in Leicester. I’ve never eaten in there but they do nice Samosas and Bhajis, and they actually know what a vegan is!

I gotta say…I’m a cat person. I grew up with cats – my parents bought kittens shortly before I was born and I spent most of my life with them! Dogs can be cute too, but I’ve never really known any dogs, not as well as cats!

6. What animal do you think you are most like in personality?

7. What new ingredients have you discovered that you love since going vegan?

I love nutritional yeast. I only really started having it pretty recently, but I love sprinkling it on pasta, or stirring it through a bechamel to make a cheesy sauce!

8. What are your favourite resources for getting inspiration for vegan food?

Oh the internet definitely! I love this month of the year because there are so many good blogs out there with new recipes, but the rest of the year I often use Finding Vegan to find new recipes and drool over pretty pictures.

9. What has been your biggest fail in vegan cooking and have you managed to resolve said fail?

So a couple of years ago I attempted making mince pies…and had a complete fail. Have I resolved it? Come again at Christmas to see!

10. Do you have a non-vegan childhood favourite food that you have managed to re-create to be sfv?

I made millionaires shortbread once! It was super tasty. Really hard to make, but I used soyatoo whipping cream, and lots of patience, and trial and error, and managed to make it! I have only ever made it once though, but hopefully I will again one day.

So, those are my questions. My job now is to nominate 8 people with less than 200 followers (I go by feedly, because that’s what I use) and ask them questions.

Charis from Floral Frosting whose blog is beautiful and food looks delicious!

Sal from Alien on Toast whose blog is hilarious and also contains awesome food.

Abi from Bake Eat Love who not only blogs but bakes too, and also posts some lovely family food.

Faye from Veganopoulous whose theme of “will my kids eat it” is wonderful.

Rachel at Thistle & Yellow Rose who not only posts nice food, but also has a super cute cat.

Caitlin at The Vegan Word who is on holiday at the moment (sorry!) but has wonderful travel stories!

Jasmine at Self Sufficient Cafe who has some lovely, healthy recipes on her blog!

and Amy from Boltonian Vegan who recently got engaged and that’s awesome! 🙂

Now I know probably loads of you have been nominated before, and that’s ok, no pressure! I am kinda new to the whole blogging scene so don’t want to push in or anything :p

But here goes, My Questions:

1. You can eliminate one vegetable from the world. Which one?

2. What is your favourite food-related memory?

3. Have you ever created some awesome food “by accident”? What was it?

4. Do you have a go-to meal for when you are feeling lazy?

5. If you won several million pounds/dollars, what would you do with it?

6. What is your favourite drink? Booze or not, doesn’t matter!

7. Where would you travel if you could travel anywhere?

8. Do you prefer to cook sweet or savoury dishes?

9. What is your absolute favourite recipe you’ve ever made?

10. It’s getting towards winter. Do you have any seasonal traditions that you do every year?

One thought on “Creamy Courgette Pasta & “The Liebster Award””