Mmm, soup. It’s that time of year here where, sure, sometimes it’s lovely and sunny…but a lot of the time, it’s raining and grey and just miserable. Soup is the best cure for a miserable day! Serve it with some nice bread and it warms you up and comforts you. This soup is made from brussels sprouts and potatoes – perhaps a combination more suited to Christmas leftovers than April showers, but if you cook brussels right rather than boiling them into oblivion, they taste delicious and you’ll want to eat them all year round!

I don’t often post recipes using vegan cheese as a main ingredient, because I know how hard it is to come by, but here in the UK it’s become a lot easier! In a lot of supermarkets – Morrisons, Asda, Tesco, and some Sainsbury’s, Violife cheese is now available. Made from a coconut oil mix, it melts really well, especially in “wet” things like soups, in toasties, mixed through pasta. 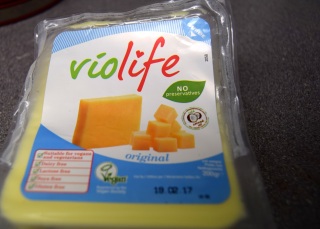 I only use a small amount here – 50g in the soup, plus extra shavings on top, but I find a little goes a long way. This cheese is the one to use if you want to feed vegan cheese to non-vegans!

I also roasted the brussels first, giving them a slightly nutty, caramelised taste which really adds to the soup – and makes brussels taste so much better than just plain boiled ones!