This past week, we have been holidaying in the Gloucestershire/South West area. We spent five nights in a hotel in Gloucester (complete with a fridge and a microwave – essential for vegans!) and travelled to various places nearby. As always, we took a whole lot of pictures of the area and the food, some of which I’ll share in this post!

The city of Gloucester is itself quite beautiful, and on our first evening we went for a walk in the sun. We found the cathedral – which was at the time closed due to it being quite late (ah, the deceptively bright British summer evenings!) – but from the outside it was still an awe inspiring sight.

We walked down by the docks which were very windy and full of seagulls – but again full of lovely sites. Pictured above is the Johanna Lucretia, which starred in the film Amazing Grace (about William Wilberforce and his campaign to end the slave trade). The docks were surprisingly quiet and it was a lovely walk.

On our way back to the hotel, we stopped by the pizza place Fat Toni’s. They offer vegan cheese on all of their pizzas at no extra cost – which is wonderful news! We decided to try it out, along with a pot of their vegan pesto dip. They also offer vegan ice cream, but it was a rather large tub and with no freezer to store it in we had to pass! I had the “La Franca” pizza, with artichokes, garlic, tomatoes. It was delicious and so good to have a pizza with vegan cheese readily available! 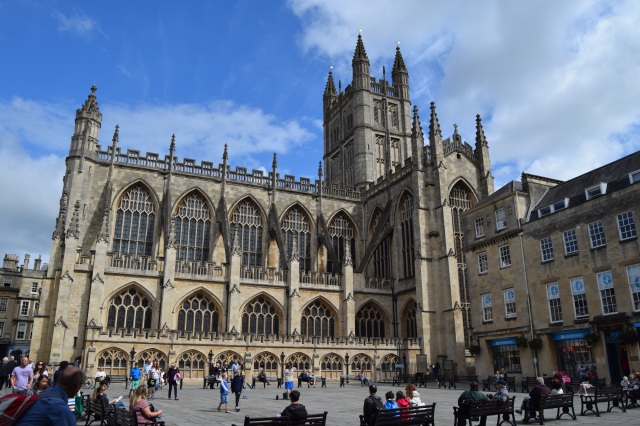 After a good sleep in the hotel, the next day we decided to have a day out in Bath, since it was only slightly over an hours journey from our base in Gloucester – and having recently graduated with a history degree (and a slight focus on ancient history) I was eager to see the city!

Bath Abbey is simply stunning, and it’s well worth having a look inside (free entry!) – pay attention to the great windows at the west and east – one depicting Old Testament stories and the other depicting scenes from the life of Jesus. They are very impressive!

Next we walked up a very very big hill (seriously an endless amount of steps) to Alexandra Park, where we were rewarded with this amazing view of the city. It’s hard to get an idea from photos of the view, but you could see the whole city and beyond – it was well worth the walk.

I didn’t manage to take a picture of lunch – which was a tempeh wrap from Harvest – but I did get a photo of this lovely drink I had – I love rhubarb and this had a wonderful rhubarby taste to it! We bought our lunch to take away and ate it in the Parade Gardens in the centre of Bath, alongside the river Avon. The gardens do have a small entrance fee (£1.50 per adult) but since our lunch was fairly cheap we decided to pay for the privilege of being able to sit down and eat! 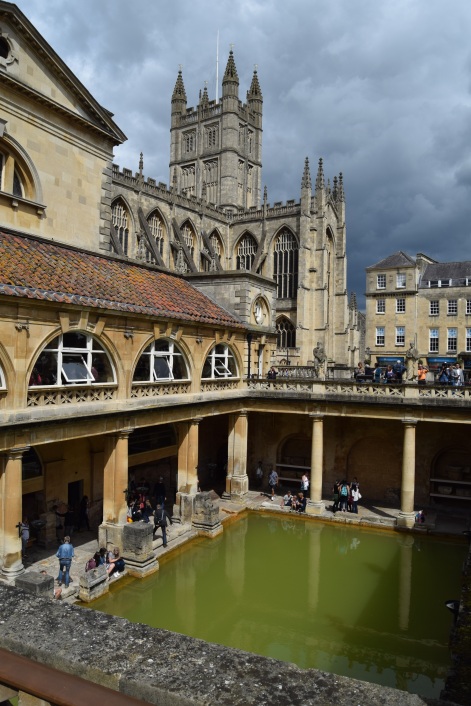 Finally, we went to the Roman Baths. These are not cheap – a £15.50 entry fee per adult (though I got a slight discount with my student card!) but if you can, they’re well worth it. It seems like they’re going to be packed, and to be honest they are pretty busy, but it isn’t a bad thing. In fact, being busy it kind of forces you to take time to look at the exhibits and appreciate them. Do take one of the audio guides – there are some fantastic commentries by Bill Bryson along the route!

At the end of the day, we were tired and didn’t fancy eating out and so just had food in the hotel room whilst we watched the Olympics – but that was good enough for us! Having a microwave and a fridge made that easy.

Stay tuned for Part 2 of the holiday, coming soon!