Hands up if you like chocolate? Yep? I bet I’m seeing everyone’s hands raised (except my mum’s, but that’s ok because we’ll eat her chocolate instead). Everyone knows I am a huge chocolate fan. I mean, this is my second chocolate post in a row (have you checked out my chocolate truffles yet?). As a kid, people would say they knew my dad and I were related, because we both were such chocolate addicts…and nothing has changed since!

Chocolate is an odd one, being vegan. You hear “…wait, you can eat chocolate?” a lot. Or people who refuse to even try vegan chocolate, thinking it tastes gross. And, OK, there are some vegan chocolates that I’m not a fan of…but I know there are some non-vegan chocolates that also aren’t that tasty. We live in a day and age where veganism is booming, and this means that there are more vegan chocolate options available than ever! I’ve attempted to put together a little guide featuring my favourite chocolates, both cheap and not-so-cheap. Note – I am in the UK and so the chocolate featured in this guide will reflect that. You might be able to get it in a different country, but please check the ingredients first as sometimes sneaky companies change the ingredients for different markets!

Let’s start with the basics – plain vegan chocolate. This is the one I use most of all. It’s Lidl’s own brand – “Fin Carré” – and sells for 30p per 100g bar, which is a really good deal! It tastes lovely too. I use it mostly for baking with – if you see a recipe on here that has chocolate as an ingredient, chances are it’s this one I use. Sainsbury’s also has a similar bar in their “basics” range that sells for 50p/100g, and Morrisons has one for a similar price too.

My ultimate favourite chocolate bar is Cadbury’s Bournville. I don’t think I’d ever tried it before I was vegan, because I assumed it being dark chocolate meant I wouldn’t like it – but it’s actually quite low cocoa percentage (35%) which means it’s sweeter and not so bitter. It also has that classic “cadbury” flavour to it! You can buy this in most supermarkets. Sometimes you can buy miniature bars of Bournville, but I often have trouble finding those.

The final “plain chocolate” I’m featuring is this “Smooth” dark chocolate from Poundland of all places. I never expected to find vegan chocolate there, but here you have it. It won’t win any gourmet chocolate awards, but for £1 for a large bar, it’s tasty and good!

Now let’s take a look at vegan milk chocolate alternatives. One of the best out there is the Moo Free brand of chocolate, which actually has several different flavours (we’ll come back to that later) but does a lovely creamy milk chocolate bar. You can buy this in some supermarkets, Holland & Barrett, and many other “health food” or vegan stores. 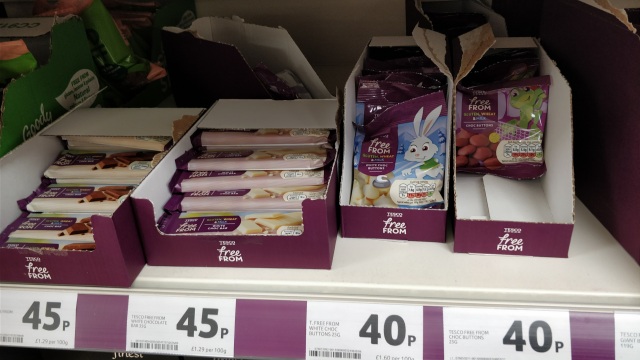 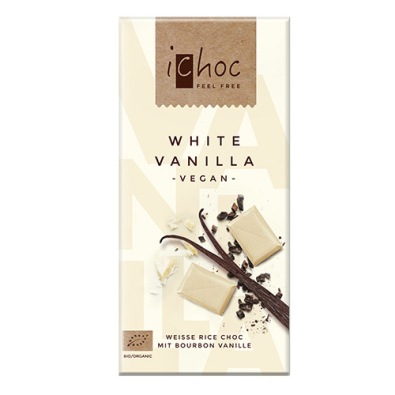 This one is possibly the best vegan white chocolate out there. It’s rich, has a strong vanilla taste, and really, just tastes pretty luxurious. It’s not the cheapest out there, but if you’re wanting some special white chocolate, I’d go for this one. You can often find it in vegan and health food shops, and you can buy it online too. 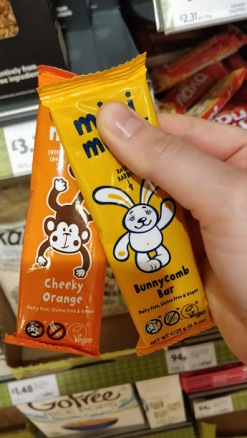 Let’s move onto flavoured chocolate! The picture above is not very good I know, of course I had to put my thumb over the brand… (I told you I am not good at taking photos in supermarkets!) but it is Moo Free chocolate once again! They do many flavours including orange, bunnycomb (which has bits like a non-vegan crunchie bar), hazelnut, banana, and fruit and nut. These two mini bars are sold in Morrison’s, but you can find them in the same places as other Moo Free bars (as above).

This is another familiar brand – iChoc again! I think this is my husband’s favourite bar. It’s chocolate cookie flavoured – the cookies being kind of like oreos. The chocolate is milk chocolate flavoured (it’s made with rice milk) and it has lovely little crunchy bits of cookies in! You can buy this in health food, vegan shops, and online.  iChoc also do a range of other flavoured bars, including white nougat, almond orange, and super nut flavours.

The Vego bar has taken the vegan world by storm in the last few years. It’s been touted as the best vegan chocolate bar out there by many, and I’ve seen people say it’s a great alternative to milk chocolate. Well, I disagree that it tastes like milk chocolate, but it’s certainly very tasty. Did you ever have nutella before you were vegan? It tastes like that, only in chocolate bar form. It’s delicious! These are now sold at Holland and Barrett.

Go Max Go bars are the go to vegan snack bars. They make imitations of many popular non-vegan bars, such as bounty, snickers, mars bars, and reeses cups. They are not cheap, unfortunately, but they are certainly very tasty. Check out veganoo’s review to see what they look like inside! These are sold in vegan shops, and online too.

Fry’s Chocolate Cream bars are a lovely cheap vegan chocolate option! You’ll notice this is the only mint chocolate I have in this guide, I’m sorry, I just really don’t like mint chocolate so it’s not something I try! But the box was next to the regular Fry’s so I thought I’d include it in my photo. These are dark chocolate bars with a creamy fondant filling – imagine the inside of a creme egg. They’re often sold in newsagents in single bars, or in multipacks in supermarkets and budget shops (this photo was taken in B&M Bargains).

Raspberry Ruffles are also vegan, and another great budget option! These are kind of like raspberry flavoured bounty bars. They have a coconut raspberry filling and a chocolate coating. You can buy them in bars, as pictured, and also in little bags of mini chocolates too. Once again, these are often sold in budget stores, and some supermarkets too.

I didn’t know whether to include these or not, because they’re not exactly chocolate bars, but they’re chocolatey and I think they’re tasty so there you go. They’re “rice cake bars” covered in orange chocolate, which doesn’t necessarily sound the best, but they are actually really good and would work wonderfully as a quick snack. You can buy them from Aldi for less than £1!

Now, I’ll talk about chocolate boxes and gifts. The first one, which is pretty widely available, is Choices Caramels. These are little caramel flavoured truffle type things that come in a box. You can buy them in the Free From aisle of many supermarkets, and Tesco themselves have their own branded version of them!

Chocolate cremes are often vegan! They’re sold more often around Christmas time (if you can call October Christmas…) – Beech’s are the main official brand, but this year Aldi are doing their own version. Whittakers do lovely coffee cremes, and mint ones too (if you like). We even found vegan fruit cremes in the Lake District!

These rum truffles are a cheap and cheerful gift! I found these in B&M Bargains but they’re also sold in The Range too. They’re flavoured with rum extract and coated in little chocolate sprinkles. They’re pretty small inside, but there are lots of them, and it’s only a pound for a box.

From cheaper options to very expensive ones – Booja Booja are the luxury  brand in vegan chocolates! They have many, many flavours – check them out here and see them all! These are often sold in vegan shops, health food shops, and sometimes Holland & Barrett. These are really a bit too expensive for me, but they are still nice!

Onto miscellaneous chocolate items! Chocolate is not all about bars! My favourite chocolate milk here is Oatly chocolate milk. The Oatly brand is really lovely and all vegan, and the chocolate milk is extremely creamy and has a wonderful chocolate taste. Have it cold or heated up and you’ll love it! Sold in most supermarket. 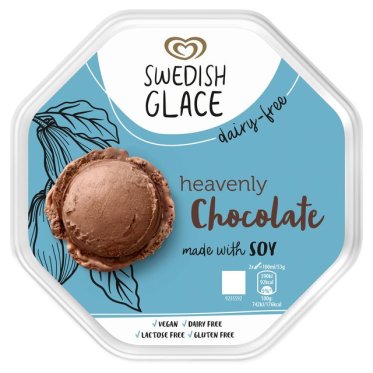 How about some ice cream? Swedish Glace are a famous ice cream brand – their vanilla ice cream is the most widely sold vegan ice cream in the UK –  and they now have chocolate! It’s a little more difficult to find – I’ve had most luck in Sainsbury’s – but it’s still lovely.

Hot chocolate, anyone? Yes, Cadbury’s drinking chocolate is vegan! Make sure you get the “drinking chocolate” – the one you add hot milk to – rather than the “instant chocolate” as the latter isn’t vegan. This is sold pretty much everywhere and is lovely. You can even buy vegan marshmallows to have it with!

So there you have it, my huge round up of vegan chocolate. I’m sure I have missed out quite a lot, but I hope I’ve given you enough to go along with. What’s your favourite vegan chocolate? Are there any you can get where you are that I’m missing out on? Make me jealous!